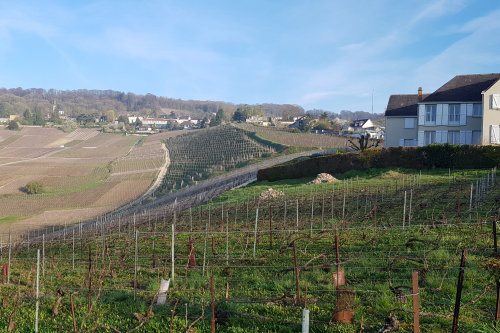 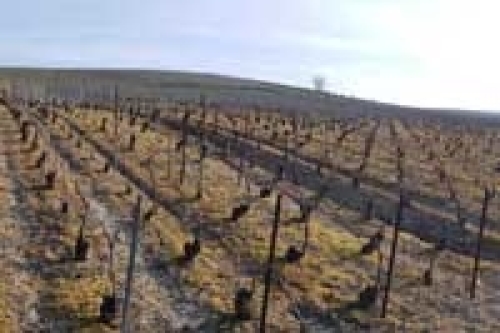 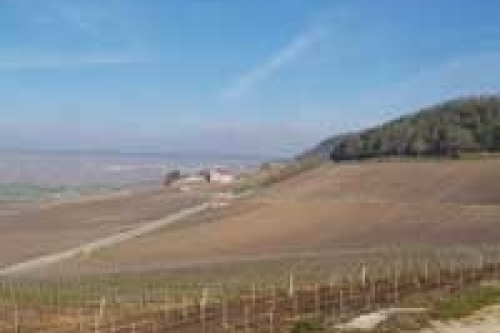 Hautvillers is most known for its abbey, where the monk Dom Pierre Pérignon was active, and many visitors to the region pass through here. The village calls itself le Berceau du Champagne, “the cradle of Champagnes”.

The Hautvillers commune covers 1177 hectares and counts 768 inhabitants (as of 2011) called Altavillois and Altavilloises respectively. This is derived form the old Latin name of the village, Alta Villare.  The Saint-Pierre d’Hautvillers Abbey is located at the southwestern edge of the village. It was founded in the year 650 by Saint Nivard, archbishop of Reims. The abbey had a relic of Saint Helena, nicked in Rom in the year 841 by a priest from Reims. This meant visits by pilgrims and income that made the abbey able to buy vineyard land. The abbey buildings have been destroyed and rebuilt several times throughout the history of its existence.

Similar to other abbeys and other church property in France, the French Revolution of 1789 meant an end to its activities, and the property was confiscated by the state. The (former) abbey buildings are today owned by Moët & Chandon. Vineyards consists of predominantly south-facing slopes, mostly with mixed Pinots.

Champagne houses that use vineyards in this village include Moët & Chandon, Roederer, and Taittinger.

Earlier, at least until the early 1990s vintages, the small brochure that accompanies gift boxes of Dom Pérignon, specified from which villages the grapes to the cuvée came. It used to be mostly a number of grand cru villages and Hautvillers, to provide a connection to the place where Dom Pérignon himself was active.

Damery is located at the Marne river, on its right bank, which is north of the river. Damery is the easternmost village along the river that isn’t counted as a part of the Grande Vallée de la Marne, which is the wider part of the Marne valley where the premier cru and grand cru villages are located.

The Damery commune covers 1544 hectares and has 1471 inhabitants (as of 2014) called Dameziats and Dameziates. The vineyards in Damery consist of dominating south-facing slopes with Pinot Meunier as the most common grape variety.

In similarity to the neighbouring village, Venteuil, Damery was scored 89% on the now-defunct échelle des crus, which means that these villages just missed out on premier cru classification, which was applied to villages in the 90%-99% range on this scale.

Grauves is located some 8 km south of Épernay, on the “back side” of the actual Côte des Blancs slope, in a valley formed by the stream Le Darcy. Le Darcy originates in Grauves and flows to northwest into the area Côteaux Sud d’Épernay. A forested area separates Grauves from the other villages in the Côte des Blancs.

Other than the Grauves village itself, the commune also contains the hamlets of Le Grand Pré, Montgrimaux, and Le Darcy.

The name Grauves is derived from the Latin grava, meaning gravel. A local nickname of the village is “Royal Coteau” since forest surrounds surrounds Grauves on several sides, a bit like a royal crown. Actually, a horse shoe would be a better description of the shape of the edge of the forest around the village, but perhaps too prosaic.

The Grauves commune covers 784 hectares and has 675 inhabitants (as of 2012), referred to as Gravriots and Graviotes.The vineyards in Grauves are located around the village, on both banks of the stream Le Darcy. The slopes vary but include southwest-facing slopes on the right bank and northeast-facing slopes on the left bank. Chardonnay is the dominating grape variety.

On the now defunct échelle des crus scale, where 100% = grand cru and 90-99% = premier cru, a smaller number of villages had different numbers for white and black grapes, i.e., for Chardonnay and for Pinot Noir and Pinot Meunier. Grauves was one of them, with 95% for white grapes and 90% for black grapes, which in both cases meant premier cru status. Grauves has kept this premier cru following the abolishment of the échelle des crus, just like other villages that achieved it.

The Mancy commune covers 357 hectares and has 268 inhabitants (as of 2013), referred to as Mancéens and Mancéennes.

The vineyards in Mancy are spread over the commune, on both banks of Le Darcy and Le Mancy. The vineyards in the western part of the commune are located on slopes on the left bank of Le Mancy, and are continuous with those in Monthelon, Morangis, and Moslins. The vineyards in the central and eastern parts of the commune, between Le Mancy and Le Darcy, as well as a smaller vineyard surface on the right bank of Le Darcy, are continuous with those in Grauves. Due to its location in a forked valley, the direction of the slopes vary, but are mostly southeast in the western part of the commune. Chardonnay is the most common grape variety, but the proportion of Pinot Meunier is only slightly less.